First of all, the little wheel was once painted yellow. That is apparently from her many remaining yellow spots:

One of her uprights:

The base of the other upright: 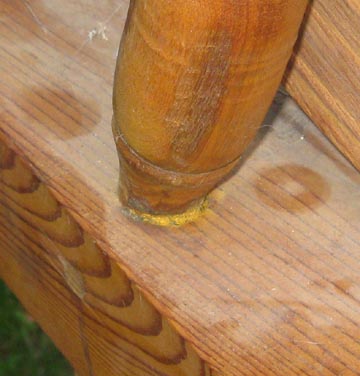 And especially one back leg, which did not seem particularly yellow close up, but obviously was when viewed from a short distance away:

But the thing that really renewed my interest in the little wheel was not her former finish, it was acquiring a big wheel, a big wheel close enough in design to be her mother: 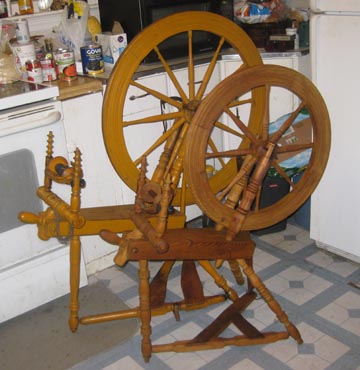 The bigger wheel is a double-treadle Canadian Production Wheel, believed to be by the maker, Ouellet.

The wheels share the same maidens. Some wheel mavens call these “Jetson” maidens, although personally I think they look like pagodas. The bigger wheel has one extra pagoda level: 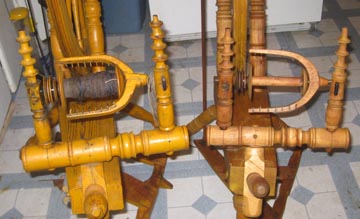 The carvings on the mothers-of-all match. The tilt tensioning is almost identical. Her uprights are similarly carved:

The legs of the smaller wheel are a bit more fancy: 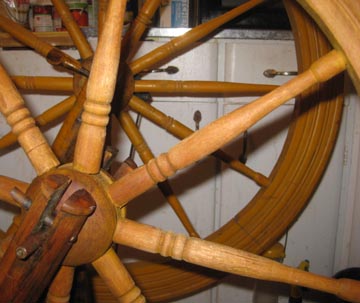 The benches are similarly shaped, with a tapered front:

The yellow ochre milk paint is on order and in the coming weeks, she will again return to her earlier glory. Her larger counterpart may get a new coat, as well!

This entry was posted on Wednesday, June 1st, 2011 at 8:21 pm and is filed under General. You can follow any responses to this entry through the RSS 2.0 feed. You can leave a response, or trackback from your own site.