Rhinebeck 2013 has come and gone. If you couldn’t make it this year, or if you are too far away to attend, here is a brief glimpse of some of the things you missed.

First of all, the scenery around Rhinebeck, with the leaves just turning and the hills just appearing in the distance.

Closer and closer: a view of the Hudson River from the Rhinecliff Bridge: sorry this is not a better shot, but it is hard to shoot a good photo from a moving car. If you’ve never seen the Hudson River, this is actually a pretty majestic thing to see.

We had made good time in our journey and were on the bridge at 9:00 AM sharp. We missed the opening gate of the show, but figured we are about 3 miles from the fairgrounds at this point so would be there fairly quickly. We were wrong. It took one solid hour to get from the bridge to the fairgrounds, thanks to traffic. It took 20 minutes to get from the bridge to the intersection where you make the turn for the fair, where this billboard greets visitors:

We crawled the next 40 minutes. It was 10 AM when we finally pulled into the parking lot. This presented a problem, because I had the car stuffed with wool to drop off with Zeilinger’s for processing and was supposed to rendezvous around 11 AM with someone to pick up a rather large spinning wheel. The one thing I wanted to take a look at first was the fleece sale, so we decided to take a quick sweep through before dropping off the wool. 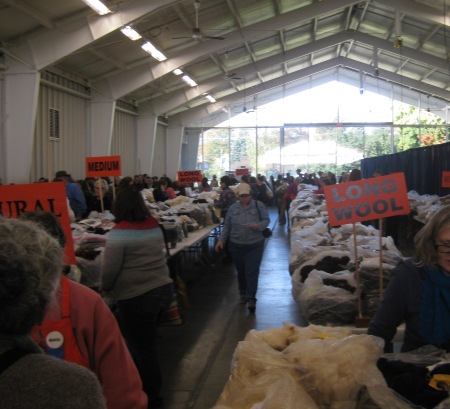 The fleece sale is pretty big. The people who HAD arrived at 9 AM had already made their picks. See the sign to the left that says “Medium”? Right behind there is the cash register. See the line that begins on the left, goes all the way back to the wall, crosses over the back, and starts down the right-hand side? That is the check out line. A quick sweep of the fleece showed there was nothing I was missing, plus the prices were pretty hefty. Relived I wasn’t going to miss out on anything, we headed over to Barn 31 to find Zeilinger’s booth and figure out how to drop the wool off. We were told to drive up behind the buildings to the vendor parking where their trailer was set up. 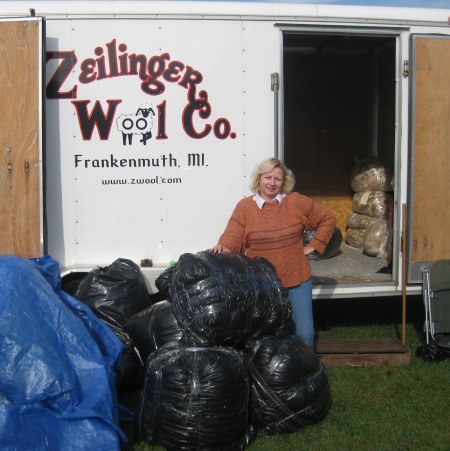 There is a WHOLE other post to be had out of the story of those wool bales! I may even have to run a contest to guess the weight — it was more than I expected. Once the wool was safely dropped off, we made our contact for the wheel, which is also a post for another day. Once the wheel was safely stowed, we had the fair to ourselves. Before barraging you all with the purchases, here are some of the sights and sounds of Rhinebeck

There were goats being judged: 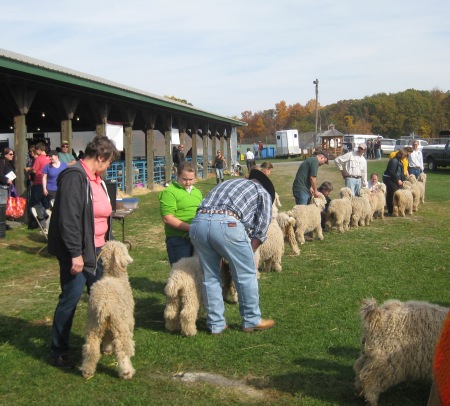 While some of their brethern waited their turn:

No pressure to perform here: this fellow enjoyed a munch of hay.

Sheep were being primped, fluffed, and buffed for their big appearances:

And out in front of the show barns suddenly came the cry: “Make way for the llamas!” 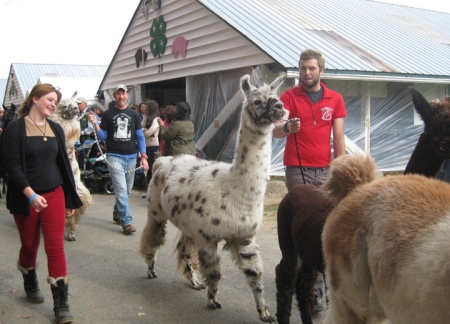 A llama parade! Not sure if this fellow is leading an appaloosa or a cameleopard!  The next llama in line was equally interesting in color and in cut:

This noble fellow brought up the rear of the parade: 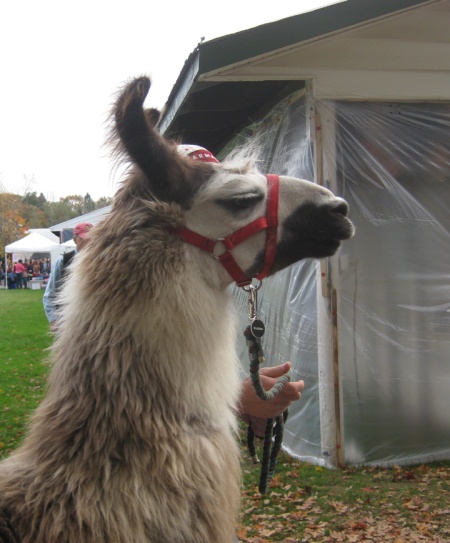 People were on parade, too. The fair seemed to be particularly packed this year.

Handknits were in abundance, sweaters, shawls, and hats. The morning was milder, so some visitors eschewed all outerwear. As the day wore on, the clouds rolled in and it turned into a bit of a blustery autumn afternoon. If you could find a little place to sit and relax, it was fun to crowd-watch. You might even see a young lady out walking her sheep:

We came home with the wheel I was picking up, some raw fleeces, two pounds of blue-faced leicester roving, and 3 bottles of wine from the Montezuma Winery. The day was crowded, the traffic was bad, but we met up with old friends, made some new ones, and went home tired and happy.

This entry was posted on Monday, October 21st, 2013 at 1:35 pm and is filed under General. You can follow any responses to this entry through the RSS 2.0 feed. You can leave a response, or trackback from your own site.

One Response to Rhinebeck in Review