… the spinning swift spins on.

This beauty is a Hornshaw Swift, handcrafted by woodworker Tim Hornshaw in Holland, Michigan and available via his Web site at: http://www.hornshawwoodworks.com/index.php?var9=36

I had a second-hand umbrella swift that always seemed a little dry. I was winding sock yarn and the dowel where the top of the swift attaches suddenly snapped. Suddenly for me, but it had probably been getting ready to do this and I just hadn’t noticed. I was able to reattach with some duct tape, but this was clearly only a temporary fix. So, what to do?

About this same time, someone posted a thread on Ravelry about the wonderful swift they had just bought. I checked the link and – Wow! – were they ever pretty. I waffled for about a week, thinking I could keep the mended umbrella swift working. This thought lasted until I went to wind yarn again.

First thing the next morning, I logged on and order the Hornshaw in cherry. It arrived 3 days later. In addition to the lovely light coloring and elegantly turned arms and pegs, it has an incredibly sturdy base. You just open up the swift, put it on a flat surface, and it is not going anywhere! The no-skid feet are truly no-skid, not even a wobble. 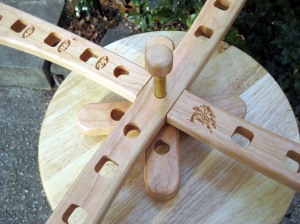 I took an architecture class once where the professor elaborated on how something needs to be useful AND beautiful in order to be considered really well-built. I would say the Hornshaw Swift meets the requirements!

This entry was posted on Saturday, February 20th, 2010 at 4:40 pm and is filed under General. You can follow any responses to this entry through the RSS 2.0 feed. You can leave a response, or trackback from your own site.