Can Summer be Far Behind?

The permasnow of February and March finally seems to be a thing of the past, the spring flowers are in bloom, and thoughts turn towards … the beach.

Last year, I found myself wishing for a nice summer headwrap. We’d leave the beach and stop off at the ice cream shop and my hair was going in every direction. I just wanted something small and light to throw on and look halfway neat.

I found my pattern in Kristeen Griffen-Grimes’s book, French Girl Knits Accessories. This is the pattern, Jasmin.

I had the book before the yarn. I had noted several patterns I liked and thought I would make, but let’s face it. I will never get to knit all the patterns I admire in this lifetime, let alone the next. So, the book was shelved for the moment.

In November, we stopped at Creative Fibers in Windsor, Connecticut, when coming home from the New England Fiber Festival. On that stop, I picked up two skeins of Louise Harding’s Noema in the Cocktail colorway, purely because I liked the colors.

During the snowy February, I was revisiting pattern books and found Jasmin again. Somewhere, my mental database matched up Jasmin to Noema and there you go.

An unintended design plus, however, was the subtle self-striping that, with the lace pattern, turned into a zig-zag pattern.

There is no schematic drawing with the pattern, but the shape is a sort of oblong with two long ties on each end.

There is a nice edge stitch formed mainly with yarnovers. 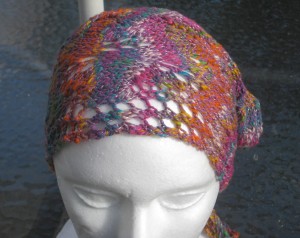 And the ties are a little like netting; they are also a series of yarnovers.

A success, although if I had to do it over again, I would not graft the two sides in the center, just knit from side to side and then pick up stitches along the cast-on for the tie. I’m not proficient in provisional cast-ons so I wrestled with this a bit. It would be easier to just knit it strait across. But whatever the construction technique, the wrap is lightweight and lovely for the summer. And I won’t look quite so messy stopping off for ice cream!

This entry was posted on Saturday, May 9th, 2015 at 6:24 pm and is filed under General. You can follow any responses to this entry through the RSS 2.0 feed. You can leave a response, or trackback from your own site.