There is this really great pattern for fingerless mitts. It is called “Vancouver Fog” and I found it using Ravelry’s pattern search. Last autumn, I was looking for a mitt pattern that had some interest, maybe cables. This one fit the bill: 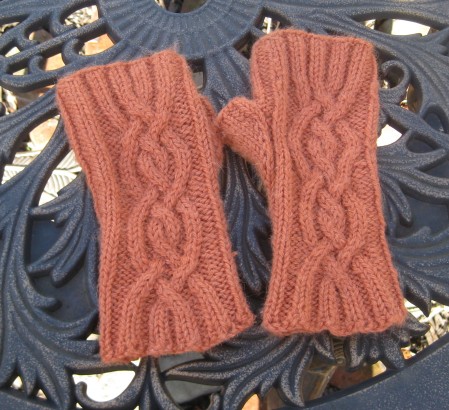 The pattern comes in two lengths: this is the shorter version. If you want them longer, you could do another pattern repeat of the cable. I found, though, that these are plenty long. Good to protect your wrists when sneak up on the little folk in the garden! 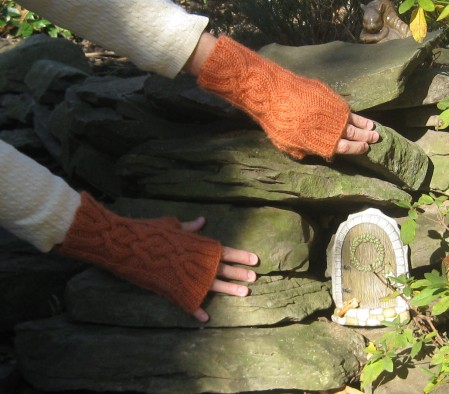 One slight pattern change that I made: I kept the K2xP2 rib all the way throughout the palm side for a snugger fit, hence the variation to the “East Coast Fog”: 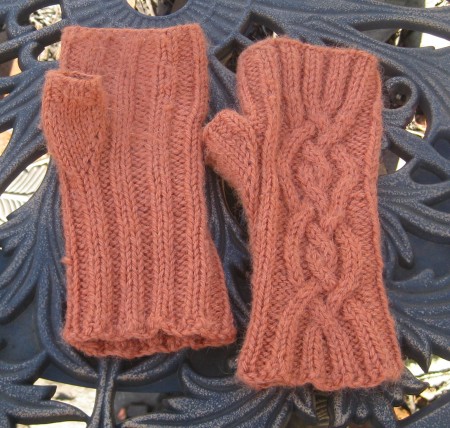 Sadly, I don’t know what this yarn is! It had been marinating in my stash for some time. I believe it is alpaca or alpaca and wool. It probably came from the closing of The Woolley Lamb in Pennington, NJ but had long ago lost its ball band. However, it worked great for my purposes here.

I live in a small town and I had a number of people admire these. So much so, one of my young friends intimated that where she liked to dress mainly in black and grey, she liked to accessorize in pink. I rooted around in my stash, found 2 skeins of Jil Eaton Minnow Merino in Ice Pink, and so a second pair appeared:

Santa Claus delivered these to my young friend and she claimed it made all her friends insanely jealous. Not that that was the goal, but it is a nice compliment. She wore them all winter and, as she has a job that requires her to sometimes be outdoors and have use of her hands to write, they were a big success.

Orange. Pink. Another friend, another admiration society. This resulted in nut just mitts, but a matching neck gaiter, too: 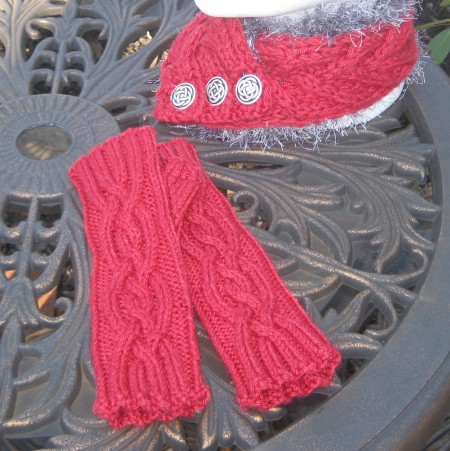 I forget the brand, but this is a 50/50 wool/silk blend in the color, “Lipstick.” The mitts, the same as previously knitted. I had almost memorized the pattern by this point:

The gaiter, the antler cable lined with fun-fur and closed with some silvery Celtic-knot buttons: 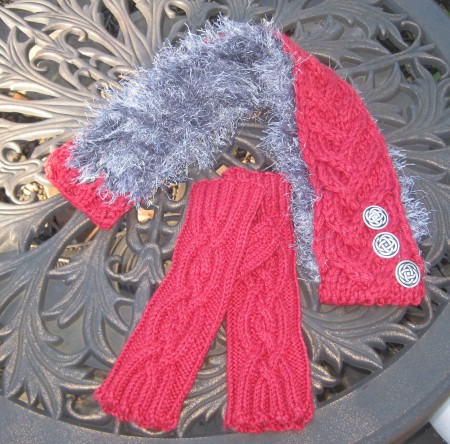 At this point, I was getting a little wound-down about the mitts when I realized that I was heading off to work in a red topcoat and the orange autumn mitts. Uh-oh. Another raid on the stash (notice that theme keeps coming up?), and some Frog Tree Merino in a red that almost matched my coat: 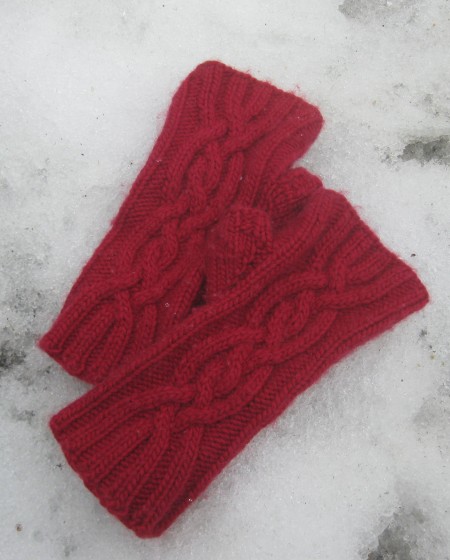 Notice the snowbank is practically all ice. Once it snowed this winter (and snowed. and snowed.), it never seemed to melt, just ice over and stay there. Definitely the winter for warm woolly items: 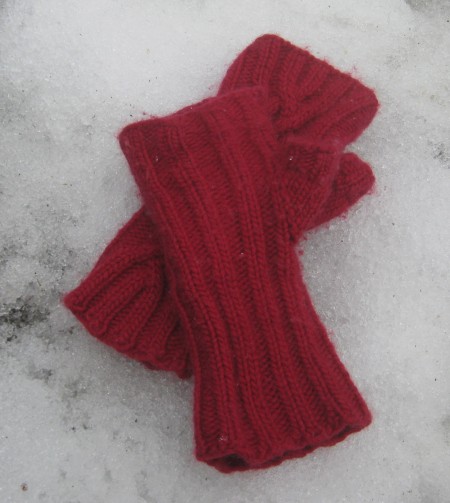 The Vancouver Fog mitts pattern is easier than you’d think. Don’t be afraid to tackle the cables; you just do what the pattern says and you will be fine. And warm. And with this winter, warm was a big deal!

This entry was posted on Thursday, March 19th, 2015 at 6:56 pm and is filed under General. You can follow any responses to this entry through the RSS 2.0 feed. You can leave a response, or trackback from your own site.

One Response to East Coast Fog