Okay, so first off, yes, I needed another spinning wheel like a hole in the head. I can’t spin on more than one at a time. They take up room. I don’t have time to refurbish the ones on my workbench. Etc., etc.

However, every so often something comes along that just won’t be ignored. This was the case with the newest arrival, a Hemlock Hill Handspinner. 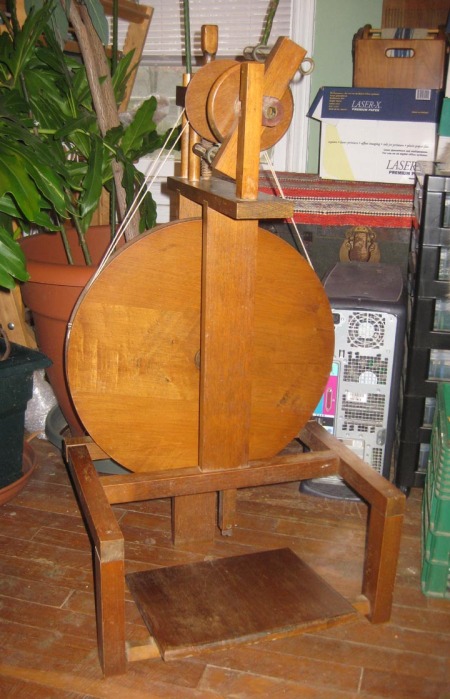 She may not be a beauty, but she sure can spin!

Several years ago, before I knew what this wheel was, I purchased a similar one on Ebay. I received an e-mail from a woman who had been watching the sale. Her father had been the wheel’s designer and she let me know that the wheel I had won was a prototype. Of course, ever since then, that made me want to see what the final version turned out to be and here it is.

The wheel was designed and built by retired engineer John Woodward of Maryland. Woodward and his wife ran the Hemlock Hill Farm for many years. They raised Romney sheep. Additionally, Woodward is credited with being one of the people instrumental in founding the Maryland Sheep and Wool Show. In the mid-70s, Woodward took on the challenge of building an affordable, sturdy wheel and the result was the Hemlock Hill Handspinner. One feature is the extra-wide treadle which allows the spinner to comfortable treadle with both feet and which, I was told, accomodated his daughter’s size 10 feet.

Another feature is the reversible bobbin. 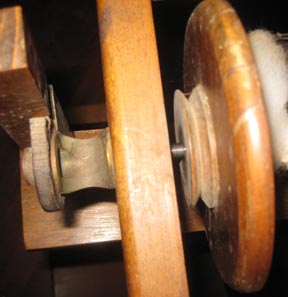 As the wheel came to me, the smaller pulley end of the bobbin is near the orifice.

The larger end and the tensioning screw.

But the most interesting feature is the flyer.

No, that is not a Woolee Winder. Woodward’s daughter explained that her father never thought to patent this flyer design. He was just looking to build a better mousetrap, as it were. It was not until later that another maker introduced a similar device.

Overall, the wheel is in good shape. The connector for the treadle and footman is a piece of leather similar to what the older Ashfords have and it is snapped, so I will replace that. The tensioning screw appears to be a bit warped; the bottom is not seated straight and I will need to examine this a little closer. Other than that, it spins fine and just needs a little clean up. It came from an estate sale in Clarksburg, Maryland; the former owner’s son was not sure if his mother knew the Woodwards or not. She raised angora goats and attended the Maryland Sheep and Wool Show, so she may well have gotten the wheel there.

If anyone else has one of these spinners, I’d love to hear from you, especially where you found it geographically. Both of mine came from Maryland within 50 miles of each other. I’m wondering if there are others out there that found themselves further afield.

This entry was posted on Monday, February 28th, 2011 at 11:33 am and is filed under General. You can follow any responses to this entry through the RSS 2.0 feed. You can leave a response, or trackback from your own site.

11 Responses to The Newest Arrival